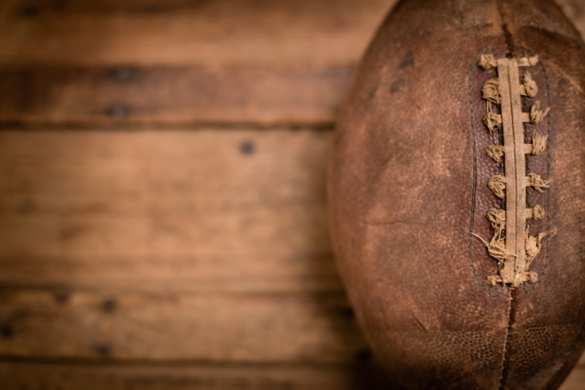 Some of my fondest memories from my childhood are of chilly Fall Saturday mornings tagging along with my dad to the Kinsman Minor Football League (KMFL) games at Thomas A. Stewart high school in my home town, Peterborough. Dad would ask me (and whichever siblings who also wanted to join him) repeatedly the night before if I was sure I wanted to go. It was going to be an early morning, it would be cold, and we’d be there all day, he’d warn. But, of course I wanted to go (although, full disclosure, I’m not entirely sure why, because I don’t exactly have a deep and abiding love for football – sorry Dad!). But sure enough, Saturday morning would roll around, and I’d drag myself out of bed in the dark hours of the morning, eager to get to the field. If we were really good (and we had time), Dad would take us to McDonald’s for pancakes. I can still remember the lingering smell of the syrup that would invariably soak into my mittens.

I inevitably had a blast at the football games, regardless of how much attention I paid to the actual action on the field. The point was I was with my dad (and usually at least one or two of my siblings), watching him do something he loved. Of course, what I couldn’t fully appreciate then, nor would I really, until I was an adult, is that what I was witnessing on those cold Saturday mornings wasn’t just some volunteer obligation that my dad was fulfilling, but a wholly encompassing enterprise that my dad had helped build: the manifestation of a lifetime of hard work, yes, but more importantly, passion.

To know my dad is to know his story. He’s been written about, profiled, and celebrated in the Peterborough sports scene for the almost – 4 decades he’s lived there. Anyone who has come up in the minor football league or played high school ball, or coached or had a kid/brother/cousin/friend/rival who has played football in Peterborough knows who my dad is. And they probably smile at the mention of “Mr. Football.”

To say that Jerry Peters lives and breathes football would be an understatement. I mean it, I’m not being hyperbolic! From his roots as a kid in his home town of Madeira, Ohio, my dad grew up with a football in his hands, literally and figuratively. He started playing as a boy of about seven or eight years old in his local minor football league. It was there, in those early years where he learned the fundamentals of the game, but also the basic tenants of sportsmanship and teamwork and camaraderie. His love for the game was instilled in him as a young boy, and it only grew and flourished as he did.

He played, of course, his whole young life, through middle and high school (where he was the captain), and ultimately won a full scholarship to play for Marietta University in Ohio. He went on to become a high school teacher and venerated coach. Football was his primary coaching job, of course, but he also coached basketball, baseball and wrestling. Dad is a sportsman in the truest sense of the word. He loves all sport, but football has always been the star. All those clichés of what we see depicted in movies about high school and college ball in a small town, both as a player and a coach? That was real life for him. My mom tells stories of how she would bundle my sisters and I up and take us to the games on Friday nights because you couldn’t get a babysitter even if you tried – the whole town was at the game. True story: my dad was, for real, in the middle of teaching a Health class when the school secretary called over the P.A. to tell him that my mom was in labour with me. I was born on a Thursday afternoon in September, so he had to miss that day’s practice, but he made it to the game the next day. They lost. He (jokingly) reminds me of this often.

It’s a life that he has felt impelled to share with others – and frankly, we’re all better for it. Dad’s passion for the game of football is unmatched. But, it’s not just the game that he’s so passionate about, it’s the desire to work with kids and to instill in them the importance and value of sport. My dad’s original vision for the KMFL was to provide an opportunity for young kids to learn the fundamentals of football, sure, but more broadly, to provide a framework for kids to tap into their passions, to feel like they belong, to develop their social and communication skills, their sense of compassion, their ability to follow direction, to be respectful and hopefully, to foster a love for the game too; a love that they just might carry with them throughout their lives. I personally think he’s achieved that.

You needn’t look further than the KMFL summer camp, an institution successfully funneling kids into Peterborough football since 1991. It’s worth mentioning that that camp is 100% volunteer-run. The fact that year after year, former players, fellow coaches, sons and daughters, people who have worked with my dad, or simply been in his orbit in some way, are willing to devote their precious volunteer hours to help make the camp run, is a true testament to the impact Jerry Peters has on the people and community he touches. He says “let’s have a football camp” and they say “tell me where to sign up.” It’s that simple.

And he’s still at it! My retired, 76-year-old dad is more active than ever in football. He’s the mastermind behind the Peterborough Wolverines, an organization that is perhaps the most respected in the Ontario Football Conference (OFC). He’s a VP on their executive committee and a co-General Manager of the Peterborough teams, not to mention the revered “Father” of the program. And he loves it.

The only thing that can light my dad up just as much as his family, is football. And even though we’ve heard his stories quite literally hundreds of times (and I’m not exaggerating), when my dad gets going down memory lane and talks about his playing and early coaching years, we lap it up. It’s quite something to grow up with a person like that as a model of what it’s like to live in your passions and to dedicate your life to something you love.

As one of his kids, I’ve had the unique opportunity to see how this man works from the inside. I’ve listened to him talk with endless enthusiasm about the games, the kids, and the coaches. I’ve overheard him talking to parents on the phone, answering questions but also, in some cases, providing comfort, or guidance or simply reassurance that their kid is in good hands. I’ve seen the countless hours he’s spent at the dining room table, poring over playbooks, rosters, emails, project plans and logistics. I’ve even caught him on more than a few occasions, sitting at that very table, staring off into space, his mind whirling, undoubtedly thinking up his next move, his next inspired idea to advance the state of football in his community.

And, I’ve also been there with him on those chilly, Fall Saturday mornings, heading to the football field, ready to realize a vision, to exercise a passion, and, of course, to play some ball.