A conversation I seem to be having all over the place lately is some sort of variation on the theme of home ownership.

Does owning a house make you a grown up? That’s certainly how I grew up. I, like every other thirty-something I know, grew up understanding that the natural trajectory of adulthood goes something like this: graduate high school, go off to university or college, get an education which will lead to gainful (and hopefully fulfilling) employment, meet your lobster (perhaps with some exciting travels and cool life experiences interspersed within), get married, buy a “starter” house, start a family, enjoy life, save for retirement, maybe move to your “forever” home, grow old and live happily ever after. Sound familiar? 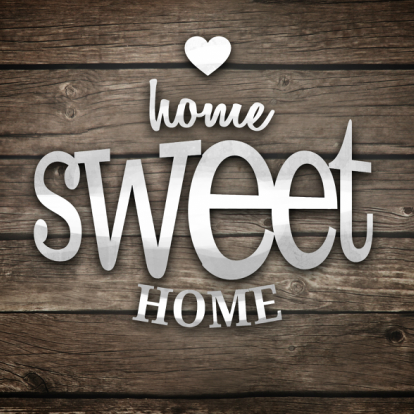 That’s irrefutably the narrative I was fed during my formative years. And when I say “fed” by no means do I mean that in a negative way. It’s not like our parents and grandparents were trying to dupe us into anything. I just mean that that was the mainstream belief, as it had been for many, many generations in middle-class North America. And it still is for many, many people. But, I believe we’re entering into an age of shifting values when it comes the perceived order of life’s milestones or the validity of those so-called milestones in the first place, particularly when it comes to home ownership.

Of those steps laid out by those who came before me, I would say I made it to number three before things kind of took a left turn for me. And I’m totally fine with it, really. In a weird way, I suppose I actually kind of like that I did things a little differently (not always by choice, however), that, like Frankie says, I did it my way. That is, if indeed those steps are what we’re measuring our relative level of adulting against.

To be quite frank, I don’t think home ownership is in the cards for me. And, honestly, I’m not mad about it. There are very real and practical reasons as to why I have basically ruled out the possibility. They include things like; I live in a very expensive city, where I will simply NEVER afford to buy – anything; a house, a condo, a semi, a patch of grass. Not unless I win the lottery. Sincerely. It might happen if I end up finding my lobster and he happens to be a millionaire, and we can make it happen together. But, that’s a lot of IFs.

Also, even though ownership is impossible for me here, I’m not interested in moving out of said expensive city, to somewhere it might be more possible, at least not now. I love Toronto, I love my work (it took me a while, but I did manage to attain that gainful and fulfilling employment I was “supposed” to get upon graduating university – better late than never, right?). I love the vibrancy of my surroundings, I love not having to drive everywhere (and not having the expense and hassle of owning a car), I love the diversity my big city provides, and I have zero interest in commuting hours of my day away so I can be house-poor in the burbs’ all for…what? Multiple bedrooms and bathrooms? A backyard? The responsibility of home ownership? An eat-in kitchen? No thank you. Well, full disclosure, I really would love the space to have a dining table so I could have people over to eat and sit at an actual table. But I digress.

Look, I get it. It’s a trade-off. That’s why it’s called a value. That’s what that means. Many people value owning a house because it’s a good financial investment for them, because they grew up in a house and can’t imagine raising a family (and all that entails) in any other way. And they value that more than, say, having to commute for hours to their well-paying job in the city that helps them afford the mortgage payments on said house. Or getting a different job in the town/city in which they can afford to buy a house. Because that’s how it ends up working, isn’t it? You find a city where you can afford a house, and move there, with employment a secondary motivation. It’s all about priorities, and I respect and understand your priority to own a house and all the things you may have to adjust in your life in order to make that a reality. I just have to say that simply owning a home is not a top priority for me. And to be completely honest, I kind of resent that people around me seem to subtly remind me (or not so subtly) that it should be.

When I began writing this, I thought that I should be careful how I position my stance on the home ownership front lest I offend the home owners among me. But, the more I thought I about it, I thought, well, people don’t seem to be concerned about offending me when they tell me I’m “throwing away” my money on rent. They don’t worry about offending me when they assure me condescendingly, you’ll get there, you’re not going to rent forever, you’ll settle down one day, when you find a partner you’ll be in a position to buy. Just because I don’t share the same value as you, however, doesn’t mean that I think everyone who buys a house is making a bad decision! I think it makes sense for many, many people. Just not me, not now anyway.

But all of that is to say, I’m no fool either. I know that I can’t live in my tiny one bedroom apartment forever; certainly not if/when I do find a partner, let alone, if I were to have a family. But even then, we’re talking about having to move into a larger space, not buying that space. I’m not an idiot. I’m just saying, for my life, right now, I’m totally fine renting, and I don’t lose sleep at night fearing that I’m throwing my money away, because you know what? I enjoy that elusive thing called rent control, in one of the most desirable neighbourhoods in Toronto. And because of that, I can afford to go on vacations, and indulge in occasional dinners out, and impromptu drinks with friends, not to mention, I can support my slight amazon.ca problem. I’m not financially free or even close to escaping worrying about money in general; all I’m saying is that I have a life that I wouldn’t if I had a mortgage. But that’s me. You may (read: probably) make a lot more money than me (or manage it better than me) and perhaps a mortgage payment might not be so restrictive for you. But cost aside, the important point is that I don’t feel that the fact that I don’t own a house makes me any less of an adult.

I live in a one bedroom apartment in a hundred-plus year old building, above a produce market in the west end of downtown Toronto. It’s old. Did I mention that the building is more than 100 years old? And with that comes the usual things you would expect with an old place. The plumbing is not great, there’s no air conditioning, so in the summer, it’s oppressively hot because the walls are all concrete and/or plaster, and they hold onto humidity with a vice grip that would make an actual vice jealous. Also, the door leading out to the fire escape doesn’t close properly, the place is small, the layout is kind of weird, I don’t have a door on my bedroom, the appliances are old and there have been occasional mice and a fair number of bugs (sorry, gross, I know). And oh, my landlord is DICK.

But, despite all of that, I’m happy to stay there, for now anyway. As I mentioned, I live in a great neighbourhood which I love. I’m also steps away from the main arterial streetcar in the city, close to a subway station, surrounded by some of the best restaurants and cool little shops I’ve encountered. I’m a five minute walk from High Park, I live upstairs from a produce market, and need I remind you I enjoy RENT CONTROL. And I value all of that more than (what I feel is) the arbitrary and perceived milestone of adulthood that is home ownership.

As my friend and brilliant novelist, Kerry Clare once posited, “were you allowed to be an adult if you didn’t own a house? If you didn’t have a house, could you possibly have a home?”

I doubt I’ll live there forever, but I’ve made a home out of my little apartment in the city and the fact that I don’t own it doesn’t matter to me one bit.