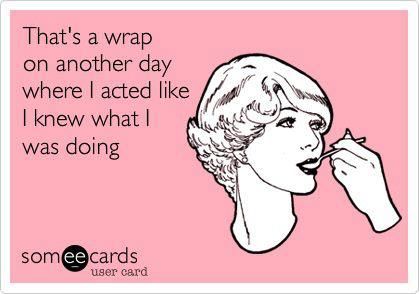 Failure is tough. It humbles us. It challenges us. It reduces us sometimes, to our core selves, leaving our nerves exposed, vulnerable to all stimuli in the immediate vicinity. It’s hard to realize (or be told) that you didn’t do enough, or you didn’t do a good job, that you didn’t meet expectations, or that you simply just disappointed someone. Those are hard things to swallow.

I have a hard time with failure. Of any kind. Well, I suppose everyone does, because if you’re the kind of person who likes to fail, or doesn’t seem to care when you fail, then I probably don’t understand anything else about you as a person. You know the quintessential question people like to ask “what is your biggest fear?” People have all kinds of answers, like death, or spiders, or snakes, or heights, or losing someone they love, and so on? Mine is failure. That is my answer every time. It’s what keeps me up at night. It’s what distracts me in the shower to the point where I can’t remember if I’ve already shampooed my hair when I’m in the process of conditioning it.

Don’t be mistaken, just because my biggest fear is failure doesn’t mean that I haven’t experienced it. I’ve been a big fat failure at lots of things. I’ve failed at meeting deadlines and goals (personal and professional), I’ve failed at diets, at creating better habits (and quitting bad ones), at being a good friend, at being a good girlfriend, and at communicating (yes, even I, a self-proclaimed excellent communicator, have failed miserably at communicating at times). I’ve failed to come through for someone, listen, to getting places on time, to practice my music enough, to keep secrets, to pay bills, and even to feed myself properly on a regular basis. I’ve even failed at walking on more than a few occasions, which has resulted in sprains of both ankles at least 2-3 times each and my right knee, twice. Forget Failure to Launch, I’ve got to deal with Failure to Walk.

But, if I could rank my failings, I would say feeling like (or actually being) a failure at work is the worst. When you’re a person who is a natural risk taker like me, and you find yourself putting yourself “out there” as they say, as often as I do, I suppose your chances of failing are significantly higher than for someone who is more risk-averse and tends to stay under the radar (especially at work). That comes with the territory. But it still sucks when it happens.

Of course, underneath all of the suckiness is the idea that it is only through our failures that we learn and grow, and if we didn’t fail, we would never truly succeed, blah, blah, blah. And that’s true, and I believe that and adhere to that, of course I do. But in these moments of failure, I can’t help but take a deep dive into some serious self-reflection and ask myself some hard questions. The loudest one of which is “what the hell am I doing with my life?” It’s a valid, if big, question. 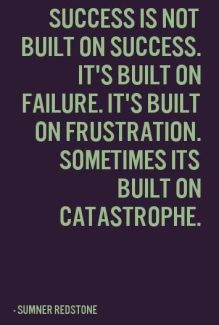 It’s hard to have objectivity about your own life, and your own self, as it were, but for me, when I experience these moments of abject failure, that’s where I go, on a quest for objectivity. In order to achieve that, however, I tend to go right down a rabbit hole of self-deprecation, plummeting through a chasm of unworthiness. Just who do I think I am? What do I think I’m doing in this job? Do I deserve to be here? Why do I suck so much? Why didn’t I do it better? Am I going to lose my job? Have I damaged my reputation? What do people at work really think of me? What do they say when they talk about me? It’s really unhealthy, but it’s also, at least in my case, involuntary.

I like to think that I take constructive criticism well, in that I tend not to get defensive or take things too personally. It’s a natural personality trait, but also a skill I’ve honed over the years. I care about what people think of me of course, but not in an excessive, formative way; what other people think of me does not determine what I think of myself. But, it undeniably influences me.

I think when I fail at work, it hits me particularly hard not because I’m upset about how others perceive me (although, I do want to be perceived well, of course), but because it forces me to face hard truths about myself. If I’m failing to do something well, or even sufficiently, I know, deep down, why. And the precipitating feedback or incident only crystallizes that which needs to be addressed within me. And that is so hard to come to terms with, because if it was something I could easily address, I would have already, but because it’s something difficult to address, I bury it deep inside myself only to have it manifest in the form of the particular failure I’m facing.

My life does not look anything like I thought it would when I was younger. Most days I feel like an impostor, like I’m just pretending to be an adult, faking it through life, waiting to become the grown-up I imagined I would. But the truth is, I think we’re all kind of pretending. Adulting is hard, and I just wish we could all be a little more honest with each other about how most of the time, none of us know what we’re doing. We’re all just making it up as we go along, keeping up appearances (for each other?), and totally winging it. I think if we were more honest with ourselves and each other, perhaps there wouldn’t be so much pressure. Or at least, we wouldn’t have to suffer alone so much of the time.

As with every other f-cking challenge I’ve faced in my life, I’ll gather up the pieces this time around and move on a stronger, wiser, more convicted Ange – in life and in work.

But, man alive, this in-between time is pretty dispiriting.

2 thoughts on “Hello, My name is Failure”